In this week episode of Pinoy Big Brother Teen Edition 4 aired on ABS-CBN’s Primetime Bida, a weekly task was given to the housemates where they will organize their own concert and perform in it as well.

And one of the highlights of the Build A Big Dream Concert was the cosplay/dance production number led by Iloilo Cosplay Cutie, Myrtle. Housemates Karen, Ryan, Alec, and Kit joined in the performance as they portrayed characters from Amped Philippines’ MMORPG Shaiya and ABS-CBN’s fantaserye, Super Inggo. The twins, Jai and Joc hosted the production number.

Myrtle as Shaiya Goddess while Karen as Mage

The concert also made trends in the social media site, Twitter as hashtags #PBBCosplay and #BuildaBigDreamConcert topped rankings in the Philippines and even worldwide.

Here are the reactions of the some followers in Twitter:

Fans were amazed by the cosplay production number. 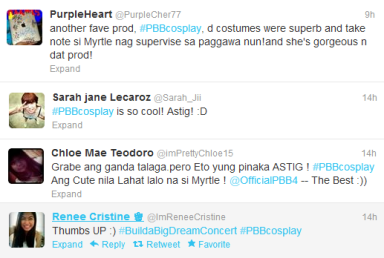 Fans compare between Myrtle and Karen

While some had mixed reaction with the boys.

Some fans  now want to be a cosplayer.

The preparation for this weekly task, the Build A Big Dream Concert  lasted for two weeks and concert night was held last May 24 (Thursday).  TV host Vice Ganda and singer Angeline Quinto will be judging the weekly task. Tickets were priced P10,000 each and all the proceeds of the concert will go to the construction of new rooms of Mababoy Elementary School in  Masbate.

Costumes made by the housemates was a task sponsored by HERO TV and Amped Philippines.