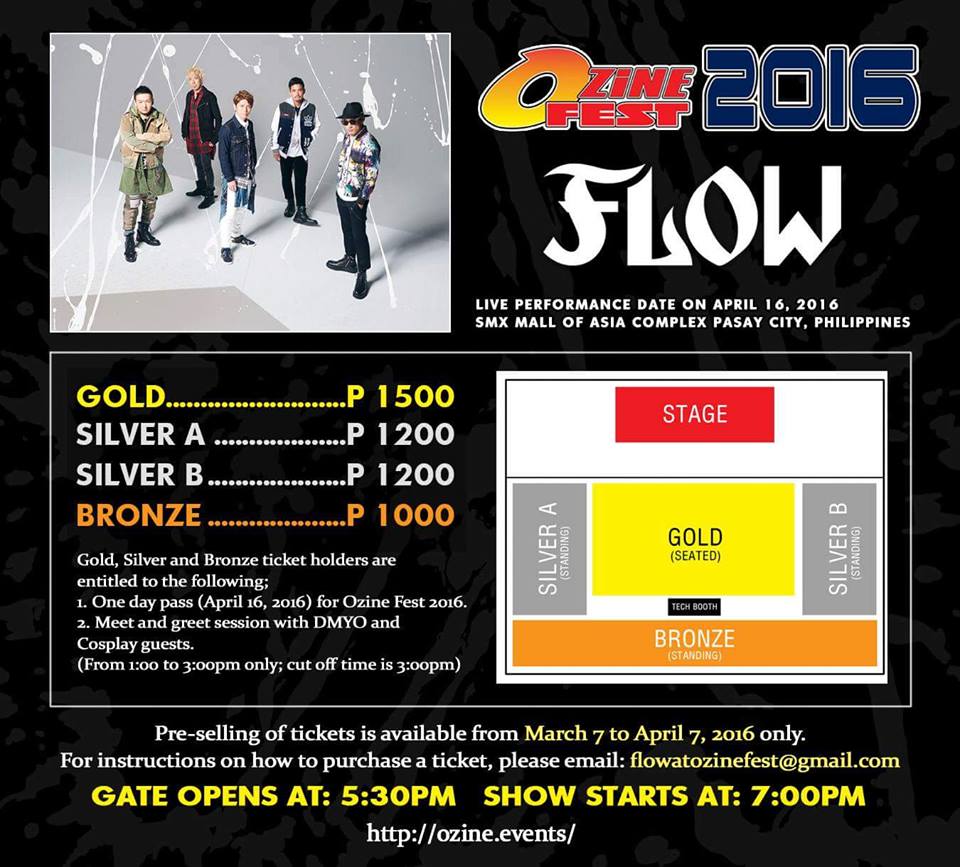 First of all, I would like to apologize for the erroneous information that we sent for the first 380+ fans who inquired on how to purchase tickets for FLOW’s Live Performance. The account name was not complete and I forgot to specify that it should have been “Otakuzine Anime Magazine / Dennis Jordan Uy”. Some people encountered a problem where in the bank didn’t accept the account name, however some banks accepted the deposit because “Otakuzine Anime Magazine” is part of the entire account name. I know we can’t return the time and effort that you’ve spent and for that, I’d like you to know that you have my sincerest apologies. I know you are all frustrated because of the payment system that we implemented, and some are eager to get a confirmation for the slot that they paid for. Let me assure you that as long as we don’t make any announcements that the pre-selling of tickets are closed, you have your slot/s secured.

Second, We noticed that a lot of people were asking why we didn’t use a 3rd party ticketing system to handle the pre-selling of the performance of FLOW. The reason for this is to avoid additional costs for the ticket that will be charged to the concert-goers: YOU, the FLOW fans. We here at Ozine are trying to lower the ticket price as much as possible to give all event attendees a chance to watch and experience a live performance by FLOW. If you guys can recall, we did a mock poll for the ticket price; there were some who agreed on the higher price and there were some who claimed that they couldn’t afford it, hence our decision to handle ticket sales ourselves. If we used a 3rd party ticketing system we still have to add more than 6 % of the total ticket cost.

Just a thought: Artists fee, airfare, stage, sound system, hall cost, permits and hotels are not cheap, so for those people who are thinking that we just want to profit from this performance, better think twice. Given the small amount of time that we had after we received the confirmation, we had to rush things up and were forced to delay the announcement of the ticket price to study if fans can afford the ticket price or not.

That being said, we all know that the GOLD, SILVER OR BRONZE ticket prices are worth the money, because on top of getting an opportunity to watch FLOW perform live, you get a One (1) day pass at the convention, and a free meet-and-greet with the guest cosplayer (which, on other conventions and on past events, are a separate fee).

Third, with regards to not replying after you guys made a deposit and didn’t hear anything from us: We understand why some people are getting frustrated and paranoid but please take time to back-read the emails we sent you.

Fourth, some people are claiming that we have no intention to bring in FLOW and that we are merely fooling people into giving their money and running off with it. However, these misinformed and rumor-mongering individuals have neither proof nor reason to speculate or make wild accusations. FLOW is set to perform on Ozine fest 2016 and everything has been secured. Please take note that our official announcement was posted simultaneously with FLOW’s and AMUSE Inc. official Facebook page.

Lastly, to those who purchased our pre-selling tickets, let me assure you again that all your slots are secured. And as of March 11, 2016 all tickets are still available until further notice.

Thank you for taking time reading this message. See you all this coming Ozine Fest 2016.

Ozine Fest 2016 will take place this April 15, 16 and 17 at the SMX Convention Center in Pasay City. FLOW will perform on the 16th at the same venue.