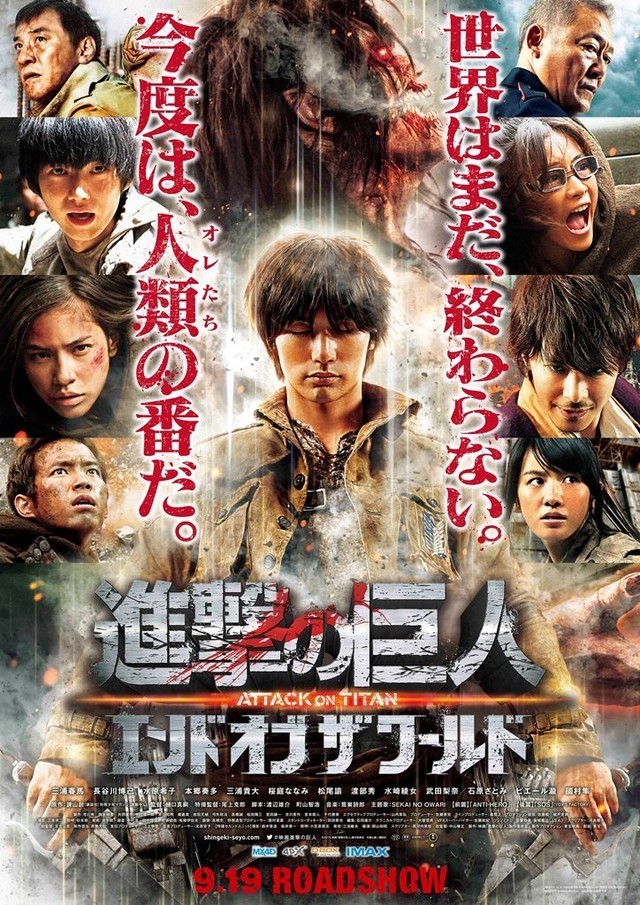 The theatrical trailer for the Attack on Titan: End of the World, the second part of the live-action movie adaptation of Hajime Isayama’s manga series Shingeki no Kyojin has been streamed on Toho’s official Youtube channel.

The second part is scheduled to be released on September 19 in Japan and September 23 in the Philippines. 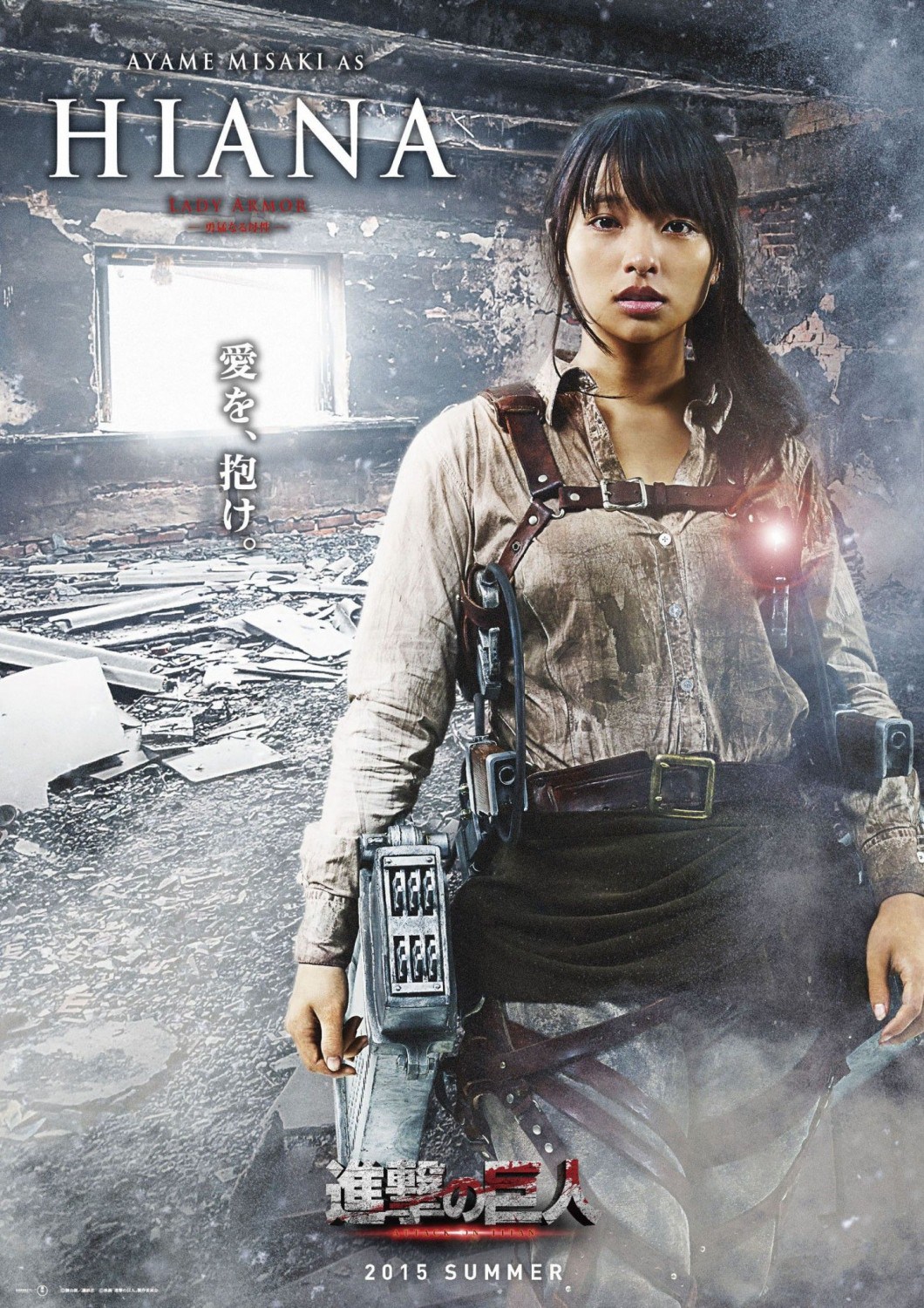 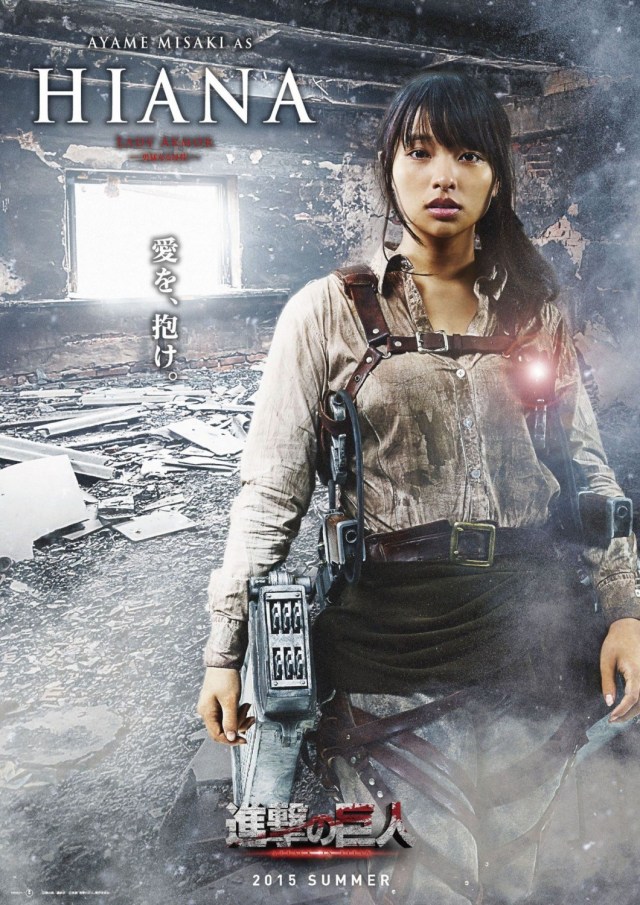 Ayame Misaki, one of the cast of the live-action Attack on Titan movie, greets her fans in the Philippines on a 46-second video uploaded on Youtube. She is saying this in Filipino.

Misaki also invites her Filipino fans to watch the movie in the theaters. She portraying “Hiana,” an original character from the movie .

Attack on Titan movie is still screening in theaters nationwide.

Check out the video below: 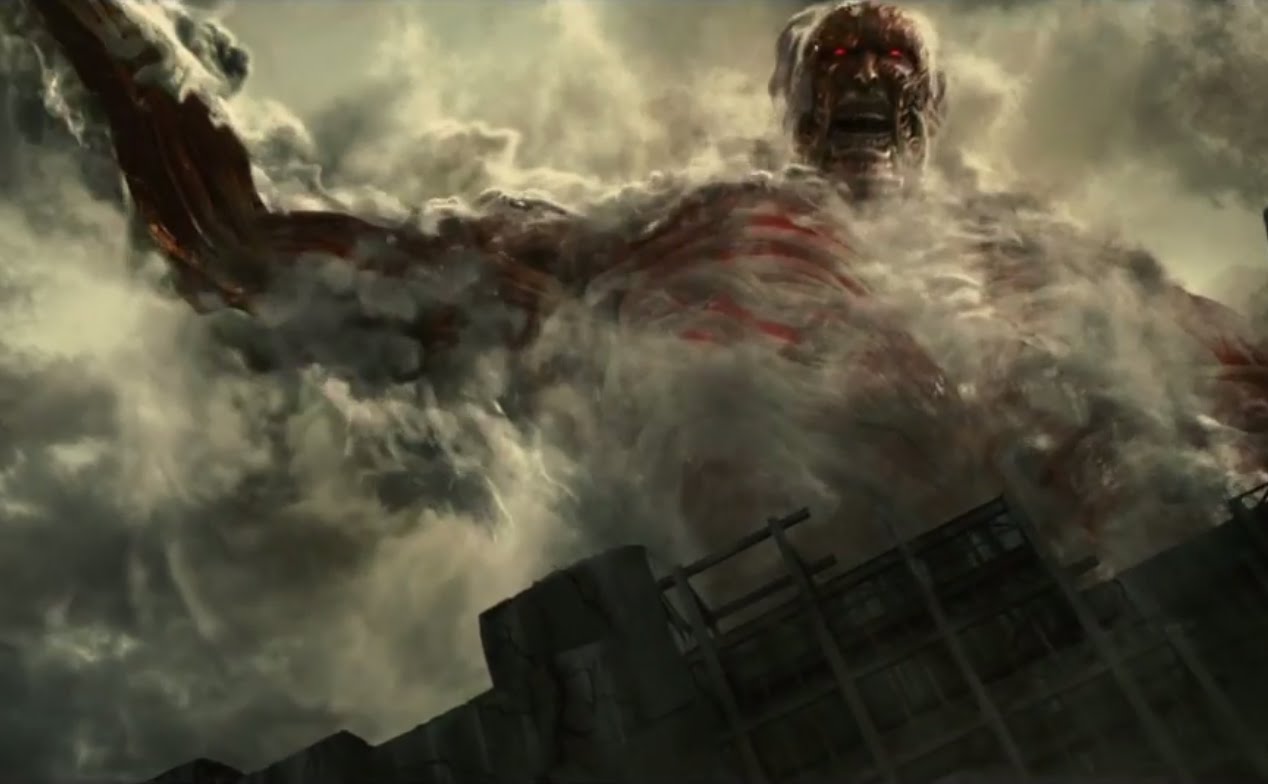 Pioneer Films and Magic 89.9 bring the first of the two-part live action movie adaptation of wildly popular Japanese manga and anime series Shingeki no Kyojin or more known as “Attack on Titan” to Philippine cinemas this August 12, 2015, with an advance screening last August 11, 2015 at SM Megamall Cinema 2.

The movie has long been awaited by Shingeki No Kyojin fans who have been looking forward to seeing it ever since its production was first announced in Japan way back October 2011. The anime was highly recognized since it aired in Japan last August 2013 while the manga started publishing last September 2009.

We where given the chance to take a glimpse into what has been the most awaited movie by fans of Shingeki No Kyojin, thanks to Amuse PH.

In every cinema that we went to, we see a display of the Scouting Legion’s uniform including the 3DMG or ODMG as what’s indicated in the film, as well as some snapshots of the movie. 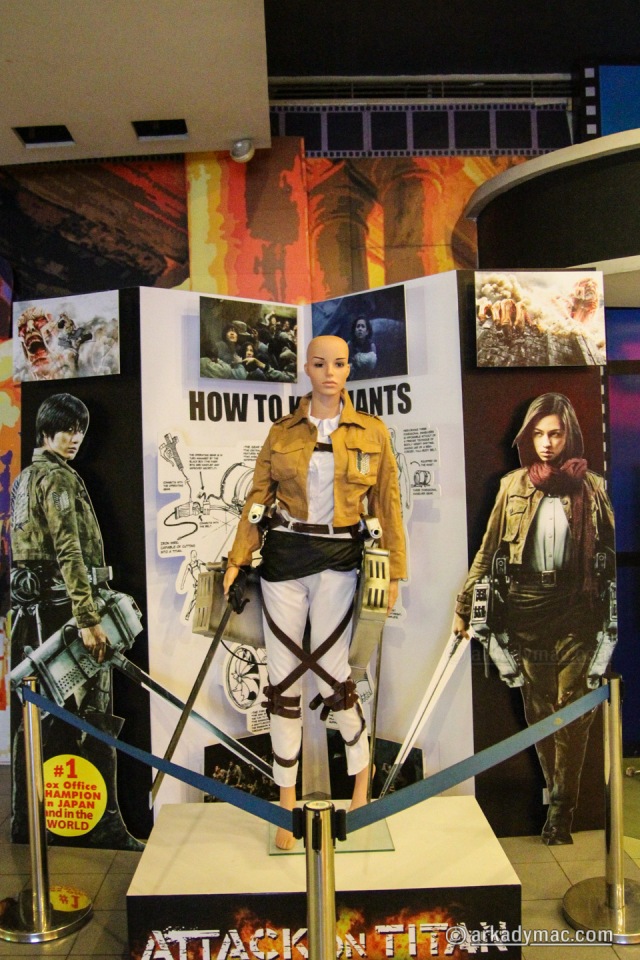 Gate’s open at exactly 7:30pm infront of Cinema 2 of SM Cinema, SM Megamall. Long line had already appeared early around 7pm as the excited guests fall in line to get great seats.

The organizers and sponsors prepared a short program before the movie began which involved giving away lots of prizes. The first one up is the Goldilocks Bakeshop, their game is simple, all you have to do is look below your seat and see if you have a Goldilocks sticker on it. You’ll be receiving some great prizes from Goldilocks.

Next is Citibank, they gave a way digital photo frames to those with fast wits and fast feet participating in “Bring Me” and trivia games.

We would like to thank Pioneer Films for bringing the movie to Philippine shores and AMUSE Philippines for accommodating us at the premiere.

Attack on Titan is currently shown in cinemas nationwide starting August 12. This film will be in Japanese audio with English subtitles and it is rated R-16 by MTRCB.

During Ozine Fest 2015, VIVA-PSICOM has announced the date of release of the “tagalized” manga series Fairy Tail and Attack on Titan.

According to the tarpaulin ad, the event launch is set on June 6-7 at SM Megatrade Halls.

Earlier, VIVA-PSICOM announced that the translated manga series will be released every month starting June 2015, and the suggested retail price is Php195 per volume. It will be distributed exclusively by National Bookstore.

Viva-PSICOM Publishing will be announcing that they will be releasing Hiro Mashima’s Fairy Tail and Hajime Isayama Attack on Titan manga locally and it is translated in Filipino.

The translated manga series will be released every month starting June 2015, and the suggested retail price is Php195 per volume.

More details will be announced at Ozine Fest 2015.

Last February 17, Viva-PSICOM had posted on their Facebook page that they were in need of English to Filipino and Japanese to Filipino translators. 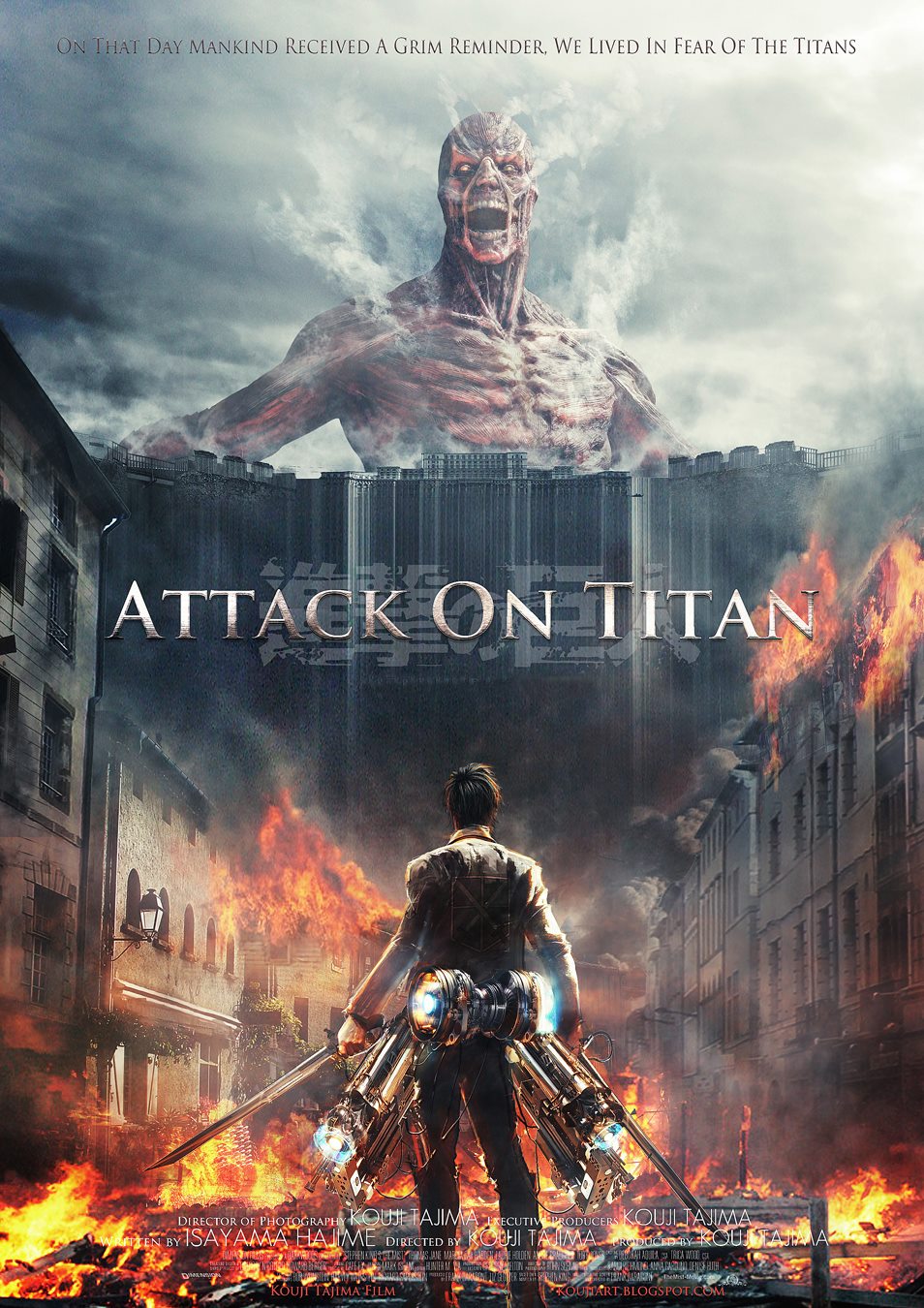 Live-action movie adaptation of “Attack on Titan” was announced to premiere on Philippine cinemas nationwide.

According to a report by Deremoe, a staff from Movie Punch, the distributor of the first Rurouni Kenshin movie has confirmed the release of the live-action movie in the country.

The report also said that this is part of the advance promotion for the movie.

In a follow-up to Robinsons Mall management through their Facebook page, they did not confirmed the report, but said to wait for further announcement.

While SM Cinema through their representative has confirmed that the live-action movie will be shown on a tentative date, August 12, 2015.

The movie is based on the manga series “Shingeki no Kyojin” by Hajime Isayama. The first part of the movie will premiere in Japan this August 1 while the second part on September 19.

Few scenes from the Shingeki no Kyojin live-action movie were shown on a Japanese morning TV show last Thursday.

The two-part film will premier on August for the first part and September 2015 on the second. The movie is directed by Shinji Higuchi based on the manga series by Hajime Isayama.

The official website has unveiled the newest key visual for Shingeki no Kyojin Kōhen ~Jiyū no Tsubasa~ (Attack on Titan Part II: Wings of Freedom.)

The official website has revealed the poster for the two upcoming live-action “Shingeki no Kyojin” movies. 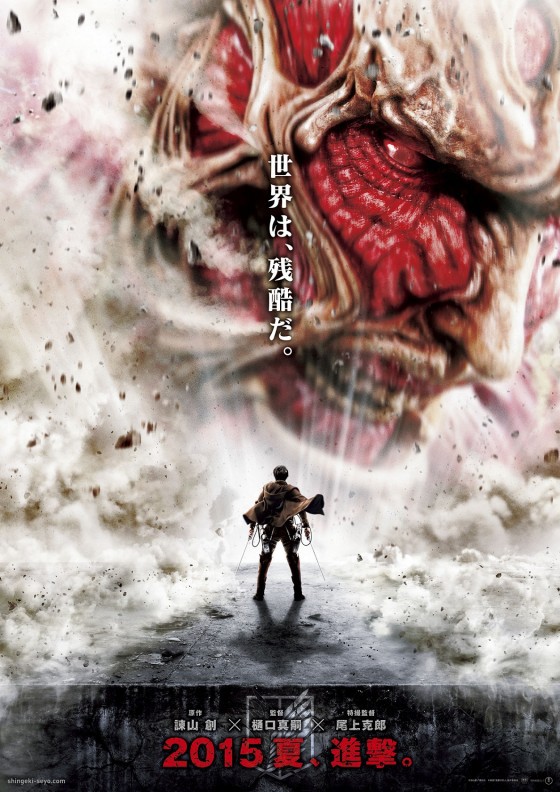 In a report by Crunchyroll, the president of Wit Studio and producer of the anime George Wada has revealed that second season of Shingeki no Kyojin is currently in pre-production.

END_OF_DOCUMENT_TOKEN_TO_BE_REPLACED

The limited edition 14th volume of Hajime Isayama’s Shingeki no Kyojin manga series will be bundled with a new OVA.

END_OF_DOCUMENT_TOKEN_TO_BE_REPLACED

According to the official website, Hajime Isayama’s hit original manga series Shingeki No Kyojin is getting two animated recap movies.

END_OF_DOCUMENT_TOKEN_TO_BE_REPLACED

It was announced that the 13th limited edition volume of Hajime Isayama’s horror drama manga series Shingeki No Kyojin will contain another original anime video.

END_OF_DOCUMENT_TOKEN_TO_BE_REPLACED

Manga author Hajime Isayama  mentioned in an interview on White Screen that he is thinking of  abandoning his first plan of a ‘traumatic’ ending for the manga series Shingeki no Kyojin.

END_OF_DOCUMENT_TOKEN_TO_BE_REPLACED

The official website for Shingeki No Kyojin has announced that the live-action film adaptation of the series will be created with a new project team.